It was a local witch that first told me about the BookBenches.

“There are half a dozen in Greenwich Park. One for that ‘Going on a Bear Hunt’ book, one for ‘The Jungle Book’, one for ‘Elmer’, and one for that book about the machine that goes through time.”

It was none of our business at all, so naturally we went to investigate. It turns out there are fifty BookBenches set out in four different trails across London; Bloomsbury, City, Riverside, and Greenwich. They are the result of a collaboration between the National Literacy Trust and Wild in Art.

Each BookBench is a shaped like a huge open book. They are large weighty, beautiful things that you can sit on, and kids can climb on. Most importantly all the BookBenches have been drawn and painted by some of Britain’s top artists. Some of them are very, very beautiful.

The benches will be left on their trails until September when they’ll be collected and auctioned for charity with the money raised used to fund the National Literacy Trust’s work to raise literacy levels across the UK.

The BookBenches are physically impressive when seen in real life – they’re large, solid, and a fantastic way of bringing interesting art into a street or park environment. The Hitchhiker’s Guide to the Galaxy BookBench

I spoke to two of the artists involved in the project about the creation of their BookBenches. One was friend and collaborator, Discworld artist, Paul Kidby. The other was Deven Bhurke, creator of ‘The Hitchhiker’s Guide to the Galaxy’ BookBench.

Paul Kidby got involved with the project back in February when the National Literacy Trust contacted him: “They asked if it was something I’d be interested in doing. Having painted Eko the Elephant four years ago for the Elephant Family, I knew first hand the positive effects of bringing art onto the streets, and how it raises the profile of the organising charity. I was delighted to get involved.”

Deven’s experience that lead to ‘The Hitchhiker’s Guide to the Galaxy’ bench was a different process: “I found out about Books About Town through the Wild in Art newsletter. Myself and two other artists were asked to submit a design for the Hitchhiker’s bench. I was really chuffed when my design was chosen and couldn’t wait to get to work. From when the completely blank BookBench was delivered it took me about two weeks to complete it – two weeks working twenty-four hours a day, seven days a week.” Paul’s very detailed Discworld bench, called ‘The Librarian’, took even longer. “My wife Vanessa and I worked on the bench over a period of about six weeks whilst juggling other projects at the same time. It took many, many hours.”

Originally, Paul’s bench was going to be more London based: “The initial suggestion was to do a bench on Terry Pratchett’s ‘Dodger’s London’ as many of the books have a London theme. But before we got working, we decided that a Discworld bench might be even better as it’s such a popular and well-known series. The character of The Librarian seemed ideal as the central image. He’s the keeper and guardian of books and is an iconic Discworld character. Everyone has been very complimentary about the finished result.”

Most finished artwork is kept under lock and key or carefully protected in a frame on someone’s wall, how did it feel knowing that the finished BookBenches were going to be put out into the world to fend for themselves? Paul explained: “It is always a wrench when the physical art leaves the house. These days it is usually a digital file that goes off and we get to keep the artwork to exhibit, but in this case the bench itself was taken up to London in a big lorry. It has been coated in protective varnish, but we hope very much that it does not get damaged. We were quite pleased to have our floor space back however.”

Deven felt similar emotions when his Hitchhikers’ fledgling flew the nest: “Speaking from previous experience, when you spend several weeks creating these artistic pieces, you bond with them in a strange way. You miss your creation, your own babies when they’re gone. You do worry about how they’ll survive out there amongst so many people, but at the same time you feel proud.”

With social media like Twitter and Intagram, both artists can keep tabs on their creations: “People post pictures of the bench or them sitting on the bench on Facebook etc, so you do get to see the public’s response to it, which is lovely,” said Deven. Paul added: “It’s really fun to receive photos of people enjoying the bench. Our Discworld bench just happens to be outside our friend’s office so she keeps an eye on it for us and enjoys having her lunch there.”

Origin of the Species

A big thank you to both artists for answering my questions.

The BookBench trails are great fun – especially with some kids in tow and I’m going to see how many of the fifty benches I can find during the summer. For book lovers, they are a treat. In some ways they are another example of the continuing cultural trend for geeky things to go mainstream.

Of the Bookbenches in Greenwich, the three stand out benches for me were The Time Machine – the only one of the benches (I think) to actually be painted in the form of a chair – it’s position next to the Greenwich Observatory is perfect. The Time Machine – near Greenwich Observatory

Great to sit on it, pull the solid brass lever in your imagination, and then picture the view of London in front of you gradually transforming back to the 1600’s with no skyscrapers in Canary Wharf and the river busy and full of trade ships again.

Honourable mentions must go to the ‘On the Origin of Species’ bench which is quite stunning. And ‘Captain Scott’s Diaries’ a very snowy bench outside the National Maritime Museum that cooled us down on a very hot summer’s day.

There are more shots of more BookBenches in my twitter trail @AndrewDonkin and on Instagram at: Instagram/AndrewDonkin

There are four separate London trails with a quiz (with prizes) for kids for each of them. (Go to the “Trails” page.)
Paul Kidby’s Discworld BookBench ‘The Librarian’ can be found in the Riverside trail near City Hall (Nearest station, London Bridge.) Paul’s art can be seen here: www.PaulKidby.Net and you can stalk him on “the twitter” here: @PaulKidby

Deven’s ‘The HitchHiker’s Guide to the Galaxy’ BookBench is outside Greenwich Station (overground). His website is: www.devenbhurke.com and you can annoy / praise him on the twitter here: @deven_bhurke

If you go and see their benches, do send the artists some feedback. Artists live for that sort of thing. And meanwhile, I’d love to hear which was your favourite bench and why in the comments section below. 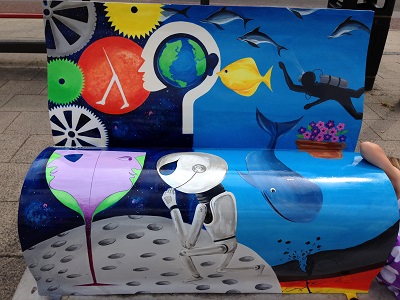 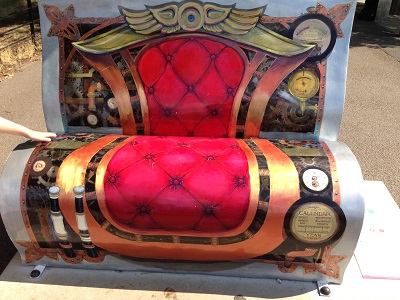 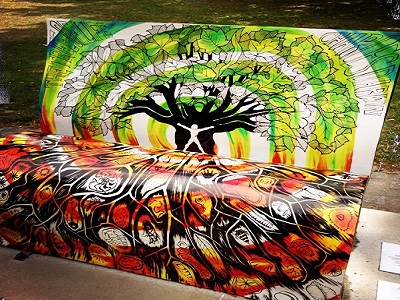 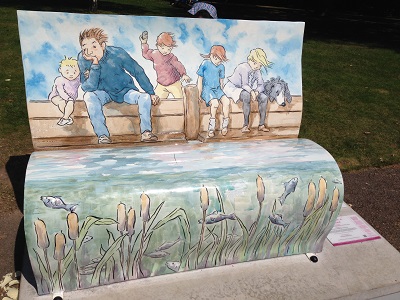